Phillip Martin Finds the 'Newsworthiness' of His Own Story 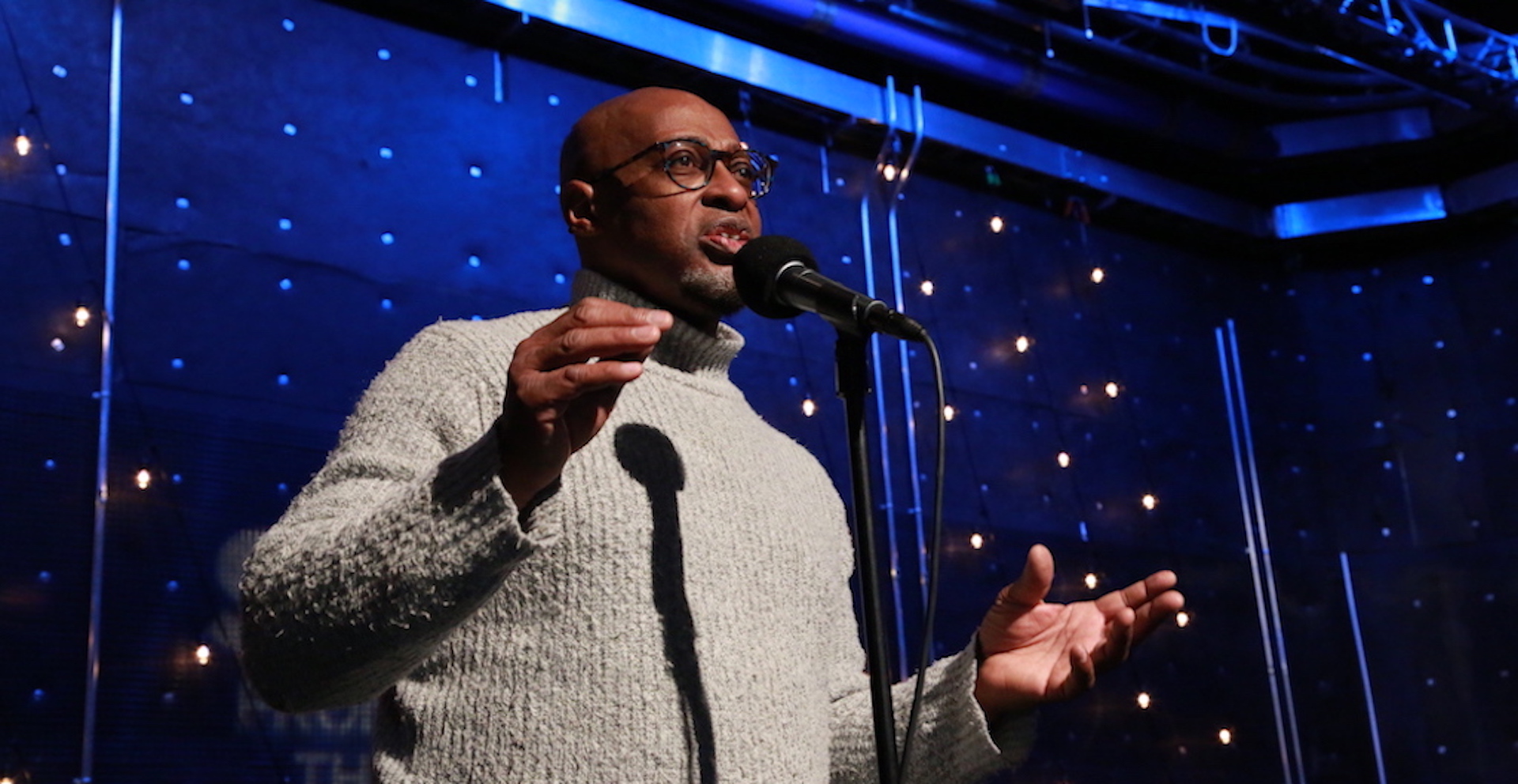 After decades of reporting, Martin turns to the narrative to himself on Stories from the Stage

Award-winning investigative reporter Phillip Martin has covered the September 11 attacks, produced a series about casteism in America, and was appointed NPR's first national race relations correspondent. Martin has dedicated an illustrious career to telling impactful, of-the-moment stories – but this is the first time he's told his own.

In 'Newsworthy' from Stories from the Stage, Martin shares his story of a trip as a young Black man from Detroit, MI to a racially-charged Boston, MA to join a movement for civil rights. What resulted after an experience on a segregated South Boston beach in 1975 was his calling to become the decorated journalist he is today.

Martin spoke with WORLD Channel about what it was like sharing his own story after years of telling other peoples' stories.

WORLD Channel: What is it about this particular story that represents the larger story of who you are and your view of the world?

Phillip Martin: For years, I reported on race and ethnic conflict for National Public Radio (NPR). That reporting was a reflection of the experiences I had, including [this] experience. The experience of 1975, in that moment as a young man shaped by racial violence in the city of Boston – that stuck with me, and it was part of my inculcation as a journalist.

Knowing what the problems are on the streets and how they might manifest, it's certainly reflected today. I think about what we saw on Carson Beach in '75 in pretty much the same way I look at what we saw in the Capitol on January 6. These were people intent on stopping other people from living their lives, who had no interest in democracy, only in mob rule, and who essentially subscribed to a belief, whether explicit or not, that they were right and that their skin color made them right.

WC: As a journalist, why is storytelling important, and how did you arrive at wanting to tell your own story?

PM: With difficulty, because I’m not used to it. And because I’m always focused on others. This story is one that I’ve told to myself many times in the context of memory and in the context of history, so the details were not blurry. There are others like that that play over and over in your mind, and perhaps some of the names of individuals might become blurry over time. But the details of [this] moment – they stick with you, because they were so vivid.

I haven’t had a lot of experience on stage telling a story – this is, in fact, the first time I’ve told a story on stage. I find it at times difficult to tell my own story, because I’m used to talking about someone else’s story and someone else’s interpretation of reality. That’s why it’s not always easy to tell one’s own story, but it’s becoming easier and easier the more you tell it.

WC: How did your years of reporting help you tell this story?

PM: It’s important to go back and find any clippings for that period that help you reconstruct that memory to make sure that memory is accurate. Quite often, memory and history clash, and they clash because our memories are far more fragile. And, of course, history can be revised, but not if you have the critical acts of the moment. I looked at clippings, I called a few people who were there on [Carson Beach], and that is precisely what I would do if I was reporting.

As a journalist, you really are steeped in technique – in the methodology of telling a story, and finding those points that are most poignant and that have the greatest impact. It’s different, for example, than if you were a poet, in trying to find that story, [which] would convince you to tell that story quite differently. As a reporter, you do rely not just on those skills but on institutional memory in constructing a narrative. It does have something to do with being a reporter, the way I told this particular story.

There are several people who have told stories in a way that might seem stilted these days, but the essence of what they told is what’s so absolutely brilliant, bringing out the trauma, the anxiety, and the human story, which is the core part of what I do. You want people’s humanity to show and to shine. You also want to portray folks in the most dignified way that they deserve. Everyone deserves dignity. When I’m listening to stories and I’m looking for stories, that is what I don’t want to leave on the floor of any cutting room.

WC: After telling your story on the stage, would you do it again?

PM: Yes, without question. So many have come to mind since telling this story – stories about traveling in Turkey as an African American, stories about being in Mozambique. We all have stories, don’t we? Everyone has a story – that guy, that woman, that child has a story – and sometimes those stories are really interesting. It just depends on who you tell.

STORIES FROM THE STAGE: NEWSWORTHY premieres on-air and online Monday, 10/18 at 9:30/8:30c. Ahead of the broadcast, stream the episode on Facebook Watch at 7:30p ET.

Episode
Stories from the Stage
Newsworthy

News is attention grabbing. But sometimes the story is as interesting as the headlines.

Episode
Stories from the Stage
Resilience

Ethnically diverse Houston, TX is a community who has learned the fine art of resilience.