In the series’ 100th episode, the artist and ASL interpreter shares how storytelling can bridge gaps between the hearing and Deaf communities.

What’s your story? This question is at the very core of Stories from the Stage.

Whether a frequent performer or someone who only tells stories to their own families, anyone can find themselves on a stage, at a microphone and in front of a live audience with one, simple goal: to tell a story. In the first season of Stories from the Stage, we met storytellers like Yvette Modestin and Szifra Birke, who shared stories of growing up and defining their identities.

Four years later, the now award-winning series meets Brandon Kazen-Maddox (they/them/theirs), an American Sign Language interpreter and artist, on its milestone 100th episode. Since 2017, the show has recorded around 300 stories and put celebrating our differences at the forefront by providing a platform for ordinary people from all walks of life, each with their own extraordinary experiences.

“Now in our fifth year, we've seen a steady increase in the number of people pitching stories, particularly first-time storytellers. They come from across the country and around the world to share stories that can make a difference,” executive producer Patricia Alvarado Núñez shared.

Alvarado Núñez and executive producer Liz Cheng, along with co-producer Michael Rossi and Stellar Story Company director Cheryl Hamilton, have built a welcoming performance space for those wishing to share a moment in their life that changed them in ways big or small. It’s a model that the executive producers believe creates not only acceptance but also appreciation for those who may look or sound different from ourselves.

“We like to call Stories from the Stage our ‘good citizen’ show. Who doesn’t want to hear a great story about a world, a people and an experience new to us? We believe that if you hear a person’s journey – from tribulation to triumph – how can you dislike or fear them?” said Cheng.

In the 100th episode One Way or Another, Kazen-Maddox, who learned ASL as their first language, tells about an uncomfortable encounter with a police officer while driving with their deaf, white grandmother. They communicate their story using SIMCOM, meaning they sign as they speak, so that “everyone in the room can understand what's being said.” Kazen-Maddox’s story touches on the “rules” of the world and how they are designed to benefit certain groups of people. ”​​I often see situations where people from the minority are asked to literally and figuratively dim their light to benefit the majority,” they said.

It’s through storytelling and performance that Kazen-Maddox is able to share their experiences with people unfamiliar with the world they live in. “Entertainment is a really safe place to be able to talk about some really serious things. So that's where I see the intersectionality of things – not keeping deaf people in their own deaf world, or not keeping Black people in our own world. Collaboration is the key,” they said.

Stories from the Stage champions people like Kazen-Maddox who can open eyes and change perspectives. As a member of the BIPOC and LGBTQ+ communities who grew up in a household with a CODA (child of deaf adults) mother and deaf grandparents (they describe themselves as a GODA, or grandchild of deaf adults), Kazen-Maddox carries a unique perspective. In their case, Stories from the Stage is a catalyst to achieve the ultimate goal of bringing more education and understanding about the Deaf community to hearing folks. “[Using ASL is] about opening the minds of hearing people. I think that Deaf people and the Deaf community and sign language are a big mystery to many hearing people. I think that the exposure of sign language from people in the Deaf community is the most important,” they said.

Performing SIMCOM also gives Kazen-Maddox an opportunity to show people a side of themselves that is rarely experienced. “This is my language acknowledgement for the Deaf community, just to emphasize that ASL is itself a fully-fledged language that has grammatical parameters, and it is beautiful. I realize that some Deaf people often don't want hearing people to SIMCOM. They would prefer to turn our voice off and sign without using your voice,” they said. “But this is how I grew up, and when I express myself, I basically am interpreting my own hands rather than thinking about the words first. I often like to say that my hands are the storytellers, and my mind and my words are just along for the ride.” 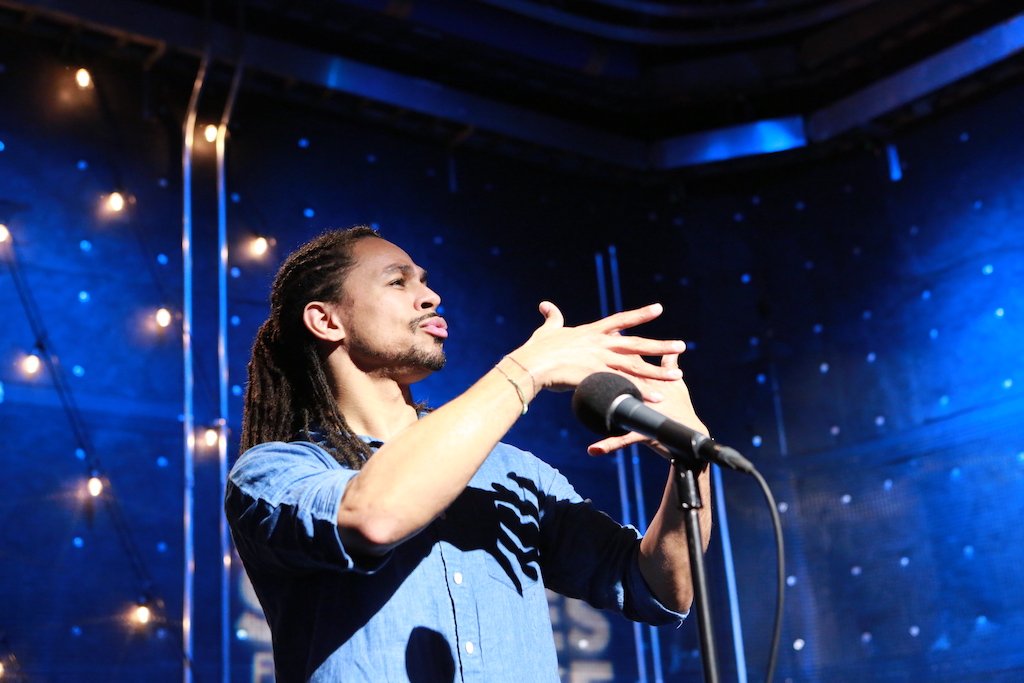 This is why we tell stories: to learn from others different from ourselves, but also to find aspects that resonate with others. While Kazen-Maddox is hearing, a large part of their identity is rooted in the Deaf community; sharing their dual identity allows them to connect with people from a range of backgrounds and circumstances. “My grandma on my mom's side is deaf and white. And on my dad's side, my nana is Black and from New York City. My nana taught me about music and entertainment and stage and dance, and my grandma taught me sign language. Both of those things are inside of me and everything that I do,” they shared. “I am culturally very, very Deaf; a big D-Deaf is what's in my heart.”

Kazen-Maddox said they want their story to guide people to reflect on and reconsider preconceptions they might hold. “I hope that people leave my story considering that what their perception is might not be the actual reality. And they might have to peel some layers back and do some digging before they make decisions about someone else's life,” they said.

Inviting people like Kazen-Maddox to the stage and allowing space for all voices is how Stories from the Stage has created such a strong, diverse community; it lays the groundwork for acceptance across all identities.

Brandon Kazen-Maddox appears on the 100th episode of Stories from the Stage, One Way or Another, streaming now online and on the YouTube, Facebook and PBS apps. Celebrate with us by using the hashtag #SFTS100.

Episode
Stories from the Stage
One Way or Another

Dealing with challenges showed storytellers the strengths they never knew they had.

Article Stories from the Stage: Countdown to 100!

This April, Stories from the Stage will air its 100th episode! WORLD honors this exciting milestone with a special celebration all month long, including new episodes and storyteller features from the series' beginnings to today, counting down to the 100th episode – One Way or Another – on April 25.

Erin Barker, co-founder and executive director of The Story Collider, a science storytelling nonprofit, who appears on the Stories from the Stage episode First, shares how storytelling and science go together.

Stories from the Stage executive producers Liz Cheng and Patricia Alvarado Núñez reflect on what makes the show special and the role it plays in good citizenship ahead of the series' milestone 100th episode.

The Best of Stories from the Stage – Facebook Watch

Article Immigrant and Refugee Stories: How Storytelling Connects Humanity in Times of Crisis

Human migration has existed throughout history, with people choosing to leave their home in search of a better life, or fleeing for freedom and safety. Whether as an immigrant, refugee or undocumented person, sharing stories provides a way for both storytellers and listeners to understand, empathize and connect.

Erin Barker, co-founder and executive director of The Story Collider, a science storytelling nonprofit, who appears on the Stories from the Stage episode First, shares how storytelling and science go together.

Article Dyslexia Awareness: How Storytelling Brought the Fight out in Anna Willis-Collier

Storytelling coach Anna Willis-Collier shares her story about coming up against intolerance encountered by people with dyslexia.

Article Phillip Martin Finds the 'Newsworthiness' of His Own Story

Read an exclusive Q&A with investigative journalist Phillip Martin to learn more about the experience that led him to become the decorated reporter he is today, as told in Stories from the Stage: Newsworthy.

Storyteller Mark Redmond, who appeared on season 1 of WORLD Channel’s ‘Stories from the Stage,’ talks about his new memoir, 'Called,' and details his 20-year career as executive director at Spectrum Youth and Family Services in Burlington, VT.

Article Experience Stories from the Stage: The Podcast

Article Stories from the Stage: The Summer Podcast

Stories from the Stage: The Podcast is back this summer with new episodes of love and loss, personal courage and unexpected triumphs.