New and streaming films to watch to reflect on the events of 9/11 and the state of Afghanistan today. 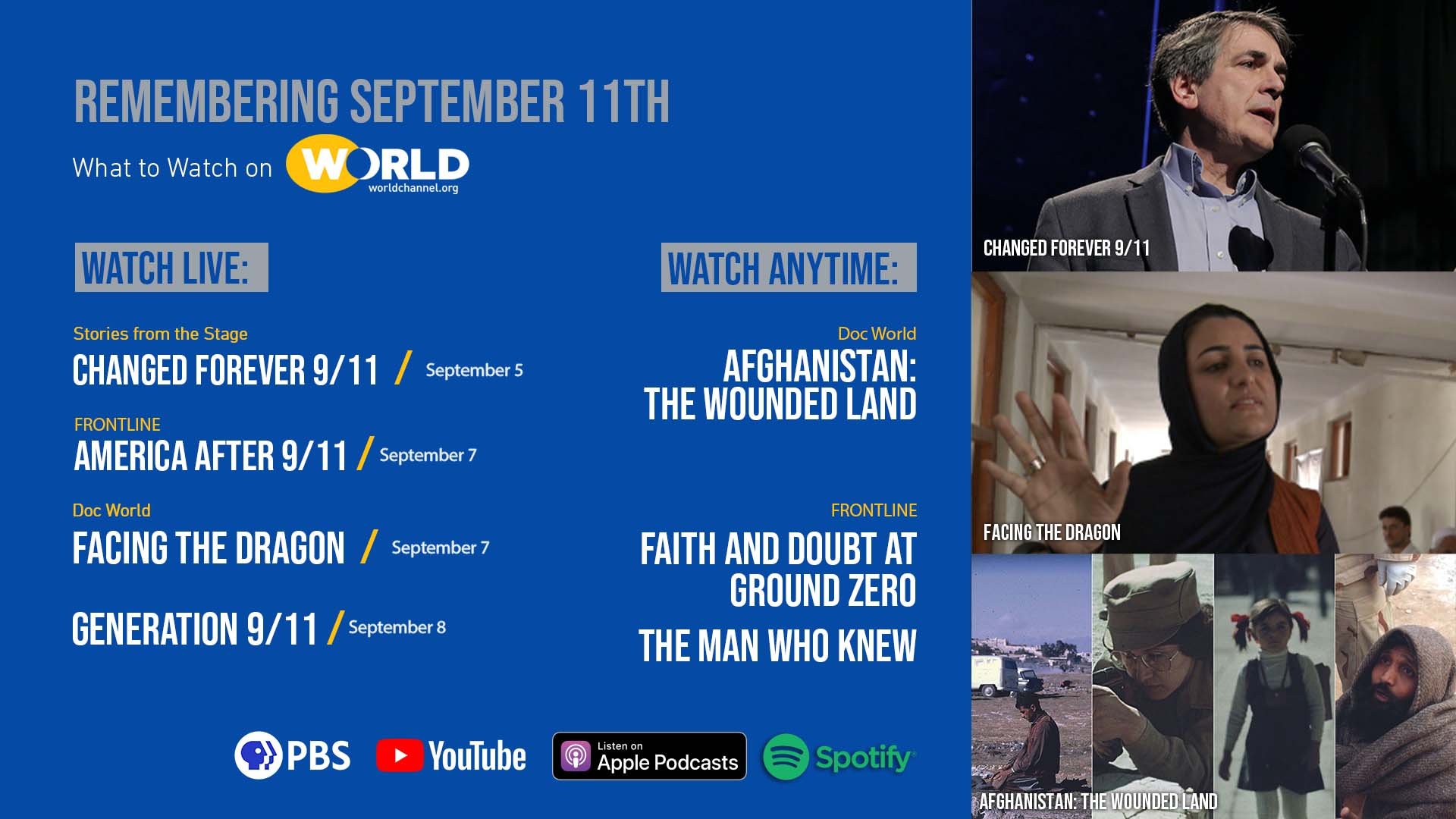 On September 11, 2001, the United States was forever changed. More than 20 years after the terrorist attacks, the pain Americans collectively suffered that day has endured. While reflecting on the loss and resilience in America over the last two decades, WORLD Channel shares stories of remembrance and fortitude.

In a special episode of Stories from the Stage, three tellers recount their experiences coping with grief and bias following 9/11; young people born in the aftermath of the attacks tell their stories; and we revisit special FRONTLINE coverage from the months following the attacks.

Read our article of how first responders and loved ones of those who lost their lives on 9/11 have moved forward through advocacy work.

For 20 years following 9/11, America was embroiled in a war in Afghanistan that upended the lives of both countries’ civilians. As we approach one year since the last U.S. soldier withdrew from Afghanistan, a year during which the Taliban swiftly seized control once more and 800,000 Afghans have fled their homes, we explore the state of Afghanistan today. In ‘Facing the Dragon,’ two Afghan women navigate life and motherhood while the U.S. withdraws its troops, and the four-part series Afghanistan: The Wounded Land chronicles six decades of Afghan history.

Watch films and read through features that honor our lost loved ones, reflect on how the nation has found healing and explore how we can continue to move forward.

Twenty years ago, the events of 9/11 changed the world. People struggled to make sense of the terrible acts and to rebuild their lives in its aftermath. After the death of his father in the attacks, David Filipov goes to Afghanistan where a simple Pop-Tart takes on a whole new meaning; social psychology professor Michael Sargent confronts his biases on an airline flight; and Jude Treder-Wolff finds seeds of hope to fuel her work as a clinical social worker and creative arts therapist.

From 2013 to 2017, director Sedika Mojadidi recorded the process of American forces and foreign aid beginning their retreat from Afghanistan. It was clear then that the country’s fragile democracy and the hard-fought advances for its women hung in the balance. This prescient documentary puts us on the ground with Nilofar, a member of parliament, and Shakila, a television journalist, who face a choice between motherhood and their personal devotion to reform in Afghanistan. Read a Q&A with filmmaker Sedika Mojadidi.

Drawing on both new interviews and those from the dozens of documentaries Michael Kirk and his award-winning team made in the years after 9/11, this two-hour special offers an epic re-examination of the decisions that changed the world and transformed America.

Driven by the stories and personalities of its protagonists, who were born in the wake of a global tragedy which, for them, was also deeply personal, this intimate film is the story of an entire generation that has been shaped by the attacks of September 11 and their aftermath.

In the 1960s, Afghanistan opened to the world but was at a crossroads. And when communists seized power, a never-ending war began. The four-part series looks at six decades of Afghan history through the eyes of those who were there, opening new perspectives into the country, people and destiny. The documentary also grants insight into what went wrong in the past and what future is being hoped for.

For many Americans, the most difficult questions about 9/11 were not about politics, military strategy or homeland security. They were questions about God, about evil and about the potential for darkness within religion itself. What was it we saw on September 11? Was it the true face of evil? Was it the face of religion? And where, if one is a believer, was God on that tragic morning?

The Man Who Knew | FRONTLINE
Available on the PBS app

When the Twin Towers fell on September 11, 2001, among the thousands killed was the one man who may have known more about Osama bin Laden and Al Qaeda than any other person in America: John O'Neill.

A conversation about the generational effects of endless war on Afghan women. Directors of 'Afghanistan: The Wounded Land' Mayte Carrasco and Marcel Mettelsiefen are joined by Nasrin Nawa, former senior journalist for the BBC in Afghanistan, and Zohra Yusuf Daoud, a Kabul native, women’s rights activist and former media advisor to the First Lady of Afghanistan. Moderated by author, journalist and NBC Analyst Atia Abawi.

It's been 20 years since the attacks on September 11, 2001, and as America reflects on the terrible tragedy, we also remember the resilience of the nation and how we continue to move forward.

Beyond the Lens with 'Facing the Dragon' Filmmaker Sedika Mojadidi

To inform and inspire with real stories from around the world.

Through a series of four films narrated by "The Kite Runner" author Khaled Hosseini, Afghanistan: The Wounded Land creates an opportunity to learn about Afghanistan’s history, understand the struggles of others who are not unlike ourselves, and build a more peaceful and prosperous global future.