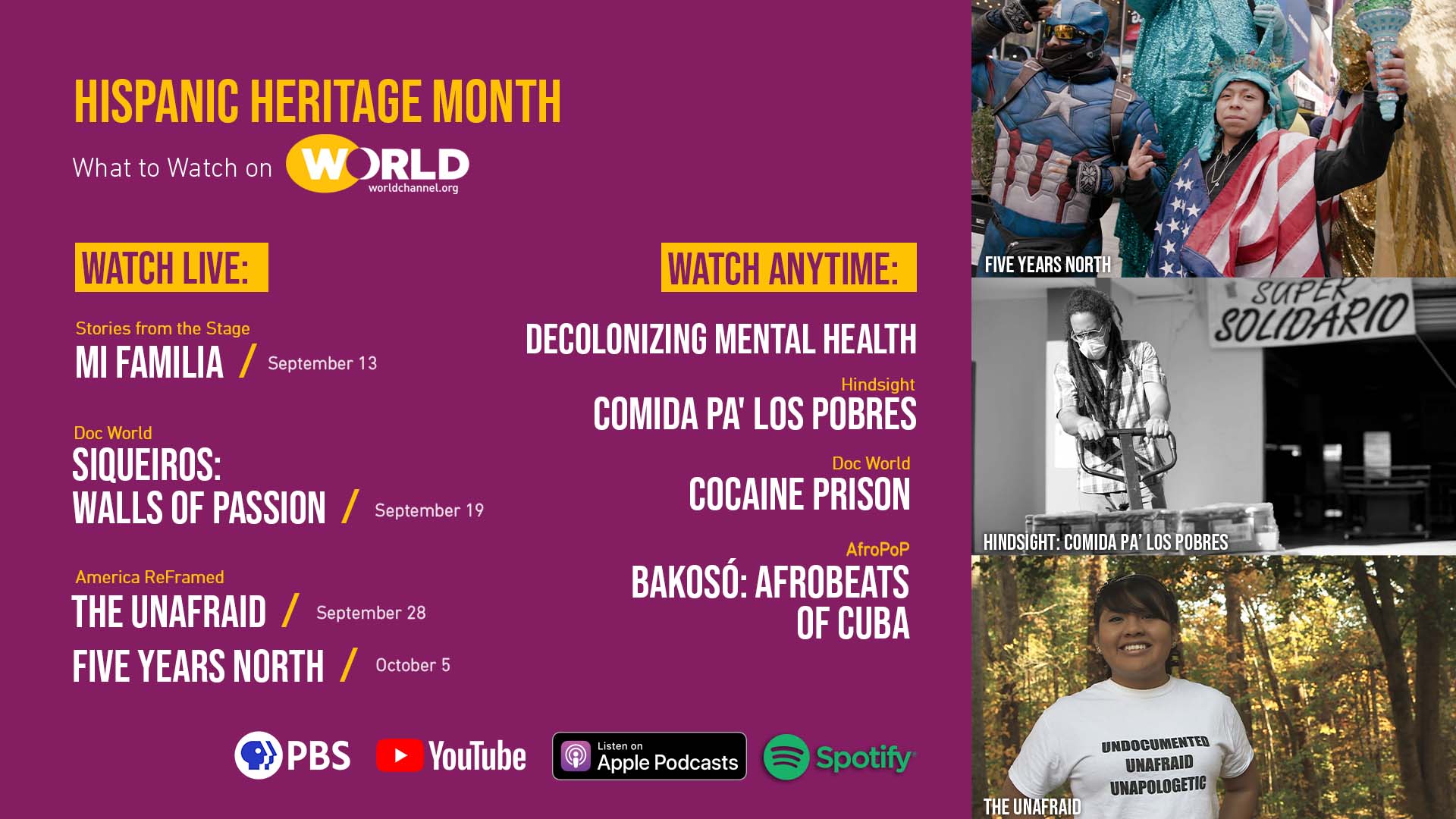 Stories That Represent the Diaspora of the Latinx Community

Each year, the United States recognizes Hispanic Heritage Month from September 15 to October 15, amplifying the traditions and values that the Latinx community embodies. From political leanings to family recipes, there is no one-size-fits-all Latinx story.

Over the past decade from 2010-2020, the Latinx population has grown by 23 percent, but issues revolving around immigration, housing, education and employment have also persisted and expanded. Even as the previous administration’s immigration restrictions are overturned, the burden of undocumented status still weighs heavy on DREAMers. The working class, often overlooked and underappreciated, have been the backbone of the country. They were also the hardest hit at home and at work during the pandemic, with families mourning loved ones who died from COVID-19, and individuals losing jobs and wages due to closed-down industries. Yet through thick and thin, the community banded together to help one another, and their outlook seems brighter.

This Hispanic Heritage Month, WORLD Channel puts the spotlight on issues of inequity while celebrating the triumphs and joys of the Latinx community across borders through our collection of films. In Los Angeles, a young Mexican-Guatemalan mother creates a space for bilingual, culturally-sound mental health support; in Puerto Rico, a bold activist risks everything to aid the island’s food insecurity. An undocumented teen travels from Guatemala to New York City to provide for his family, where, in the 1960s, Boogaloo music rose from the intersection of Black and Latinx neighbors in Harlem and Brooklyn.

Mi Familia | Stories from the Stage
Sept. 13 on TV | Available now online, on YouTube & on the PBS app

Families come in all shapes and sizes. They’re made of unique individuals with different takes on life and the ways to live it, but what binds them together is love.

The story of one of the great artists of the 20th century, David Alfaro Siqueiros. An advocate of modern public art, Siqueiros was one of the first muralists to paint on the exterior of buildings to bring art closer to the people.

Carmen Castillo is a first-term city councilwoman in Providence, RI who maintains her job as a hotel housekeeper. A reelection campaign presents challenges, but she stays true to her vision for justice and equity to prove that “she can do it!”

Banned from attending Georgia’s top five public universities and from paying in-state tuition at other public GA colleges, DACA students unite in this portrait of the undocumented struggling to pursue their dreams.

The story of Luis, an undocumented Guatemalan boy who arrives in New York City with little support and many responsibilities, and Judy, a veteran ICE agent who must weigh the human cost of her work.

Created by largely Puerto Rican, Cuban and African American youths living alongside each other in the 1960s, Boogaloo music served as an authentic and vibrant cultural expression. Journey through  a pivotal moment in '60s music history when blues, funk and traditional Caribbean rhythms were fused to define a new generation of urban Latinos.

Giovanni, a young Puerto Rican activist, confronts the island’s persistent crisis of food insecurity. Motivated by his childhood struggle with hunger, he seeks to inspire his fellow citizens to join a movement of solidarity-oriented work by feeding families and college students through mutual aid efforts – all while facing challenges from local authorities.

Follow the lives of indigenous Bolivians who work at the lowest levels of the cocaine trade. The film bridges the widening gap between the North & South and offers a new perspective to the War on Drugs being waged.

Bakosó: Afrobeats of Cuba | AfroPoP
Available online and on YouTube

What does “Está Rico” by Marc Anthony, Will Smith & Bad Bunny have in common with “Made For Now” by Janet Jackson x Daddy Yankee? When Afrobeats hit Cuba, it helped to create Bakosó – beautiful proof that the exchange between Cuba and Africa did not end with the transatlantic slave trade.

Decolonizing Mental Health
Available online, on YouTube and on the PBS app

When a mental healthcare facility failed to approach Alan’s bipolar disorder within the context of his cerebral palsy, his mother Rosalba resolved to find resources to treat Alan rightly, patiently, and creatively.

Deconstructing stereotypes around homelessness lies at the core of Dr. Igda Martinez’s work at New York's Floating Hospital. Shannette Champman, a mother of two, was able to seek accessible mental care when she was most in need.

Why does the same story of gentrification and displacement keep playing out over and over in cities across America? A tireless advocate wants to make sure that the transformation happening in his neighborhood does not leave out its current residents.

One immigrant organizes a counter-attack to President Trump’s cancellation of Temporary Protected Status for more than 300,000 immigrants, threatening to send them back to devastated countries they haven’t seen in decades.

A working-class single mom activist and a climate scientist sue Exxon Mobil to hold them accountable for decades of misinformation and inaction on climate change.

A quest to expose sexual exploitation and trafficking leads filmmaker Chelo Alvarez-Stehle to where her childhood ended and family secrets began. Documenting the transformation of a survivor, Chelo undertakes a journey of healing, setting out to shatter the silence about sexual abuse in her life.

In 1937, Haitians and Dominicans of Haitian descent were exterminated on the basis of anti-Black racism. In 2013, the Dominican Republic’s Supreme Court stripped the citizenship of anyone with Haitian parents, rendering more than 200,000 people stateless – Elena and her family stand to lose their legal residency. Negotiating bureaucratic processes and a racist, hostile society, she becomes the face of the struggle to remain in a country built on the labor of her father and forefathers.

From DACA students fighting to continue their education to the reelection campaign for Rhode Island city councilwoman Carmen Castillo, WORLD Channel is committed to bringing the diverse faces and voices of the Latinx community front and center.

Black history is American history. As we renew our collective commitment to lifting up the stories of Black movement makers and culture creators who define our world. Celebrate Black History Month with stories of leaders, artists, and everyday individuals making waves.

Profiles of people who are either caught up in or helped by the levers of the law.

Article Experience Stories from the Stage: The Podcast

Article Prioritizing Your Wellness: Where to Find Mental Health Support, Treatment and More

No matter who you are, how you identify or what you believe in, there is a resource available to help. If you or a loved one is struggling, seek support at one of these organizations.