A story of the Asian theater culture through the eyes of children.

New York City’s PS 124 school’s theater group has been the only Asian American team to compete in the renowned Junior Theater Festival. CURTAIN UP! features the Chinatown theater club students on their journey of self-discovery and identity as they prepare for their musical production of Disney’s 'Frozen'. Go beyond the lens with filmmakers Hui Tong and Kelly Ng about their kids-eye view documentary.

The following interview has been edited for clarity and brevity.

Why did you want to tell this story, and specifically through the eyes of children?

Hui Tong: [During] the summer of 2018, ‘Crazy Rich Asians,’ the Hollywood all-Asian cast film, was coming out, and everyone was talking about Asian representation in the entertainment industry. So I was actually curious about theater, like how Asian or Asian American people were doing in the theater industry in New York City. Also because I myself was a theater enthusiast in college; I did a lot of directing and acting in college.

Kelly Ng: I think there's also this certain tenderness in telling a story about representation diversity through the eyes of children. There's something really unfiltered in the kids' perspective, and just really knowing that even at their age, 10, 11 years old, [that these issues]  were really forefront in their minds was something that was very, I guess – it had a certain attraction for us, and we hope for our viewers as well.

HT: Because [this is] a group of Chinese-American kids in Chinatown doing [a] very mainstream 'Frozen' show or mainstream Disney show, there's certain natural conflict or natural tension within what they're doing. As a theater actor and director in college, I've been struggling with this kind of like, who I am and what I'm performing, in a way. Those are all the struggles I had as a theater person.

For children, I mean, they're growing up, they're receiving all this information from both their families and the society. Their families are Chinese immigrant families. And the society is giving them all the Disney stuff. These are potentially very interesting topics for us to cover. 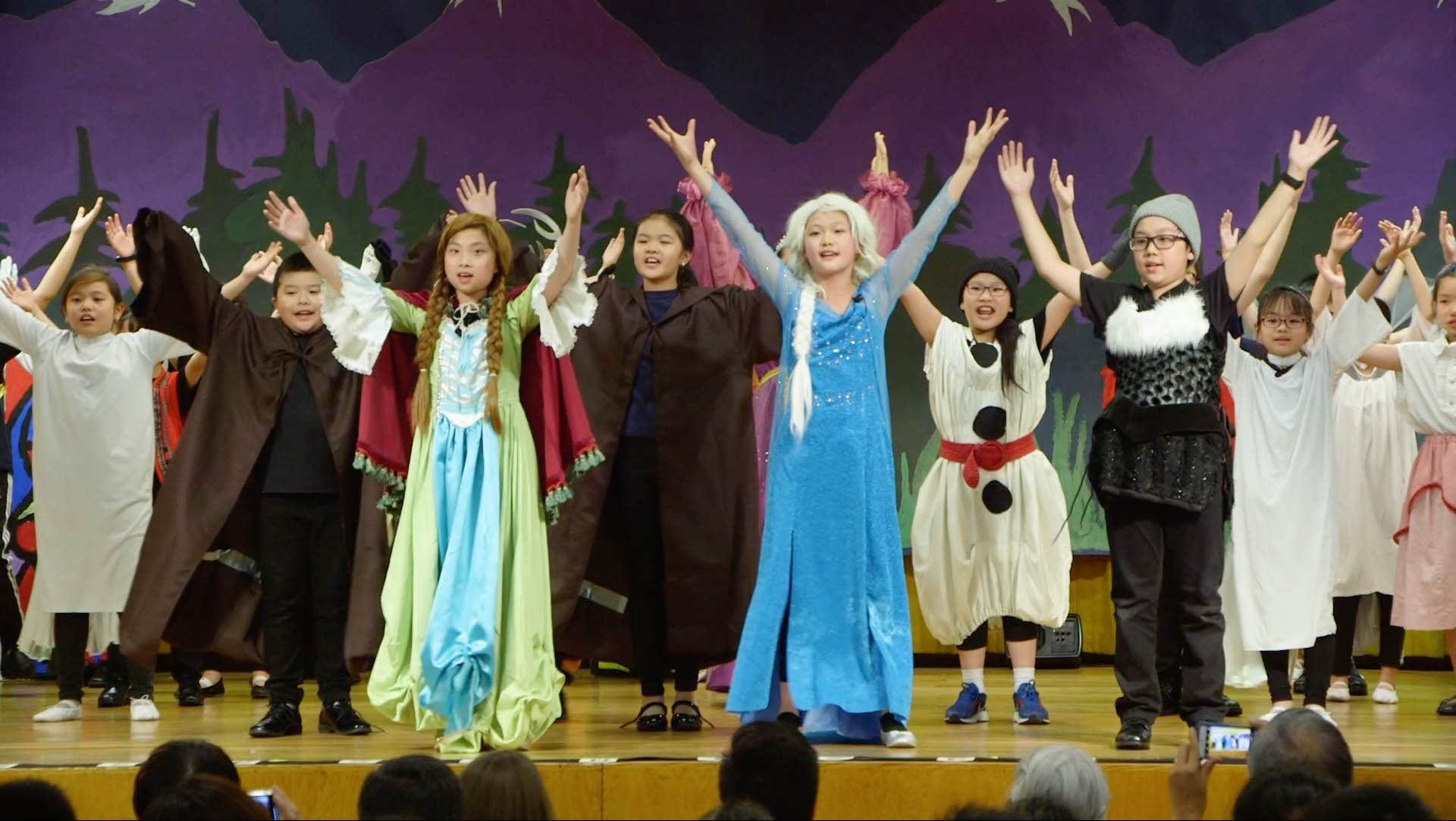 What do you hope audiences will take away after watching your film?

KN: I think this is one of the few organic instances where they just started talking about this Asianness issue. Instead of when [they were] sitting in front of us in a sit-down interview where we ask them very pointed questions, this kind of just erupted.

We also tried to include a diversity of growing-up experiences, even though these kids are growing up in between cultures as Americans, but also ethnically Asian, but for each of them, it is still quite different. Family backgrounds are a little bit different. Their personalities are a bit different. I think being able to showcase that Asian identity is not boxed up in a certain way – there's a variety of Asians just as individuals in any other community – I think that, for me, was something that I hope the viewers would take away.

Another point that I think maybe resonated a little bit more personally with me is this whole idea of the value of arts education, or like a profession, the arts. I think that growing up, I also was confronted with a lot of this pushback from parents about pursuing a career in the humanities and social sciences rather than going to medicine and things like that. I just hope that our educators and our adult viewers, like educators and parents, would also be able to somehow see the value of the arts, even just how much joy can bring to the children.

The first time I saw the place, I was very surprised that these are kids with so much energy, and they were renewing the whole Chinatown with their own energy. Many of those kids were not actually Chinatown residents; the parents sent the kids to Chinatown to be able to get an opportunity to be immersed in a more Asian or Chinese culture. We wanted to show a picture of Chinatown not as what we've always imagined. And it's not only in New York City – it's across the country.

The other thing is, because I wasn't born and raised in the U.S., it was always curious for me to look at those kids, we call them ABCs – American-born Chinese – or ABAs – American-born Asians – what kind of struggles they have in their life, to just present the challenges all the third-culture kids are facing. Maybe not only Asians, because when I was traveling, I've told these stories to a lot of Latino friends, or all the immigrants’ children, and there's always this tension between family and society, between the mainstream and your own ethnical background.

Why is this story important to tell at this time?

HT: Kelly and I are on the same page that what we're doing as documentary filmmakers is more just to humanize our community. And, as I said, people may have some stereotypes towards Asians or Chinatowns or Asian kids, and we were just showing them as who they are. We're just showing as many aspects of their lives as we can. Them at school, them at home, them having conflicts with their parents, them having their own dreams to chase, them now doing math or them doing theater.

KN: I think it's important anytime, but in the past year, I guess, thanks to the pandemic, there has also been a lot of anti-Asian sentiment around the world, but particularly in the U.S. It's probably a more light-hearted way into the Asian community. Obviously, it doesn't represent all of the Asian community, but we do hope that it's a film that can ease some of this tension that's going on right now. And also just be able to let [the] Asian community be recognized as individuals who have different interests and talents just like any other community. Hopefully our kids’ humors and [as] cute as they are will also be able to somehow bring a more light-hearted care in the midst of all this conflict and tension and the otherness in the world today.

Kelly Ng is a multimedia reporter in Singapore. Her work includes working with Singapore's TODAY newspaper. Ng currently works at The Business Times where she investigates data and disputes in the financial industry

Hui Tong is a documentary filmmaker in Beijing, China. Most recently, Tong finished his first book about the struggle of identity told by Asian students in China and in America.

CURTAIN UP! is streaming for free online and on the PBS app.

While preparing to stage a musical, Chinatown kids discover their own cultural identities.

Article Back-to-School: What to Watch on WORLD

Watch films exploring the moments we can experience only in school and the influence that people we meet on this journey have on our personal development and success.

During Asian American Pacific Islander Month, WORLD Channel will amplify the voices of the many in the AAPI community by sharing stories of defiance, solidarity and humanity.