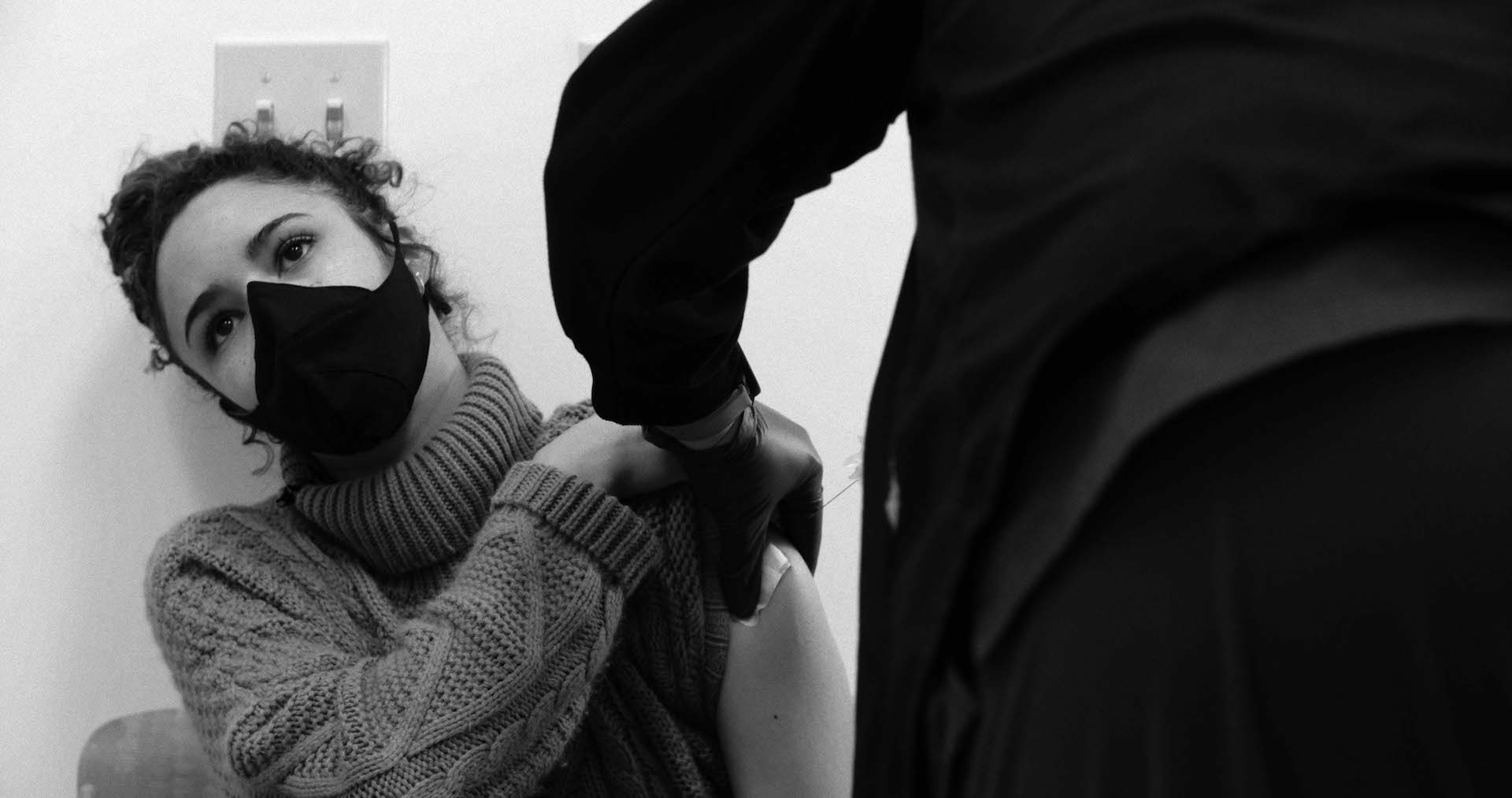 Doubt in the system weighs heavily on BIPOC who have yet to get a COVID-19 vaccine, while for others, personal politics continue to foster skepticism.

With COVID-19 vaccines and boosters now widely available in the U.S., and the omicron variant still raging in most states, the country has settled into a state of uncertainty between the lingering pandemic and a “new normal.” The plan to return to work in 2022 has come to a screeching halt for many, leaving employees in a work-from-home or hybrid situation; airplane travel continues to increase with the TSA extending its mask mandate through March; and parents are faced with sending their children to school safely. COVID-19 has rocked the foundation of the way we all live, and while Americans have attempted to return to business as usual, progress out of this global pandemic remains tied to vaccination status.

Since Sandra Lindsay, a Black nurse in Queens, New York, received the first COVID-19 vaccine out of trials in December 2020, 62 percent of Americans have been fully vaccinated. In 2021, President Joe Biden’s goal of getting at least one dose into 70 percent of adults was reached on August 2, nearly a month behind his intended deadline of July 4 and just as the Delta variant was becoming the dominant strain in the U.S.

In tandem with the World Health Organization’s declaration of the pandemic in March 2020, pharmaceutical and biotechnology companies Moderna Therapeutics and Pfizer/BioNTech worked with mRNA technology to create the first vaccines. Both were approved for emergency use by the U.S. Food and Drug Administration with upwards of 90 percent effectiveness. In August 2021, the FDA granted full approval of the Pfizer vaccine, and Moderna received full approval Jan. 31.

Over the last year, children as young as 5 years old became eligible for their first COVID-19 vaccine. While some school districts around the country opted in when it comes to vaccinations for a return to school, debates within the larger education system continue over requirements and masking.

Although the need for booster doses was at first contested, health and government officials have begun urging those vaccinated to receive a third dose as soon as five months after a second dose (sooner for the immunocompromised). It has been reported that our immune response to COVID-19 may be waning  sooner than was originally expected.

In December 2021, the highly transmissible Omicron variant sparked a surge in COVID-19 cases, resulting in record-high hospitalizations and prompting a newfound sense of urgency over boosters. Yet, according to the CDC, only 23 percent of fully vaccinated Americans have received a booster.

With cases and deaths once again increasing, and as the president works toward vaccine mandates, the decision of whether or not to get vaccinated can have consequences.

It’s a choice seen at the center of ‘This Body,’ a film by Zac Manuel through HINDSIGHT, the initiative by Reel South, Firelight Media and the Center for Asian American Media. When Sydney Hall, a young Black Louisiana State University medical student, volunteers as a COVID-19 vaccine trial participant, she falls back on her faith in the medical industry and a calling to help others. Hall faces skepticism from family and friends who voice their distrust in the same systems she wholly believes in.

Hesitancy in Americans eligible to get vaccinated has emerged as a harmful deterrent toward efforts to curb the spread and occurrence of further mutations of COVID-19. According to Time, the vast majority of current hospitalizations from COVID-19 infection are of people who have not received the vaccine. This has prompted frustration in healthcare workers, parents, and families with loved ones who are immunocompromised or aged 65 and above.

While vaccine hesitancy is subjective to the individual, it does serve to look at where and why different populations may be experiencing doubt. In Black communities, low vaccination turnout was a foreseeable outcome when we examine the complicated history between Black Americans, the government and the medical industry.

In 1932, the U.S. Public Health Service began their Syphilis Study at Tuskegee using a group of 600 Black sharecroppers. Approximately 400 of the men, infected and unaware of the true nature of the trial, were withheld treatment, only to be told that they were to be tested for “bad blood” – they spread the disease to spouses and their children, with many dying of syphilis and related complications.

The Tuskegee trial is one of the most infamous examples of the unethical mistreatment of Black populations, but a precedent for this type of manipulation was set earlier, when slave ships crossed the Middle Passage. Men and women sick with unknown illnesses were thrown overboard; others were forced to take harmful medications. Enslaved people were unable to initiate their own medical care without a slaveowners’ permission. Cemeteries were often desecrated as hospitals and medical students sought cadavers to experiment on.

In more recent history, the health of Black Americans has been openly disregarded: Though her contribution to medicine is celebrated today, Henrietta Lacks’ cancerous tumor was unknowingly sampled and studied in the 1950s. In the ‘60s, Black women, including civil rights activist Fannie Lou Hamer, were given hysterectomies with no knowledge or consent as a form of forced sterilization. Even today, the maternal mortality rate is three times higher for Black women than white women.

This historical indifference to the physical and mental safety of Black people, combined with low diversity rates within the COVID-19 trials, results in a not-so-outlandish concern and a consequence of scarce vaccinations in Black neighborhoods.

To understand the current state of vaccine hesitancy means looking deeper into the systemic inequalities. In areas with little public funding for infrastructure and education, and where poverty and language barriers limit accessibility, efforts to make healthcare necessities accessible go undersold, hesitancy around them more transparent.

Coupled with historical mistreatment, a lack of social equity poses a challenge for BIPOC to feel comfortable getting vaccinated. The reality for some is that they may not see a way to safely or viably – both for themselves and their families – make the effort. Transportation, childcare and time off from work to attend a vaccination appointment or handle potential side effects are real-life problems for communities of color that their white counterparts often don’t have to worry about. The risk of side effects, though at times overinflated by the spread of misinformation, frighten people who cannot financially afford to stay home sick, and those undocumented who  stay away from appointments where record-keeping is essential.

Surveys suggest that BIPOC alone do not make up the majority of those that remain unvaccinated.

According to The New York Times, there are two dominant thought processes among the unvaccinated, which can be fairly split by demographic: In predominantly rural, white, politically right-leaning communities, people who are not vaccinated are adamant in their refusal, whereas those in communities that are urban, left-leaning and primarily made up of Black and Latinx Americans are hesitant yet open to vaccines. Studies show the latter group makes up less than half of all unvaccinated adults in the U.S.

If we further explore who is getting vaccinated, and where, we can begin to see and understand further demographic patterns, with education, wealth and politics factoring in. In the conservative South, specifically Alabama, Mississippi, Arkansas and Louisiana, vaccination rates are well below the national average, hovering around 45 to 50 percent, whereas highest rates – 70 to 75 percent – are occurring in liberal Northeast states like Vermont, Massachusetts and Connecticut.

For people who remain unvaccinated that aren’t deterred by social obstacles, a resistance to the vaccine has been perpetuated by politics and misinformation.

In April 2021, The New York Times found that both willingness and actual vaccination rates averaged lower in counties in which the majority of constituents voted to reelect former President Donald Trump in 2020. Trump, who once discounted the dangers of COVID-19 during the length of his last year in office; his endorsements have been few and far between, despite Republicans making up a large majority of those resisting vaccination.

Despite the ongoing divide among the vaccinated and the unvaccinated, most medical professionals and government officials continue to agree that vaccination is the best – and potentially only – way to curb the pandemic.

Luckily, vaccinations have reportedly been increasing steadily in all 50 states, even in those with the fewest distributed shots. While attempts to incentivize the unvaccinated, like prize money and free doughnuts, have seemed feeble (though not entirely useless), the recent uptick in vaccinations is being attributed to the virus’s variants, citing their more transmissible nature as the motivation some resistors needed.

Whether a person decides to get vaccinated or not, uncertainty surrounding COVID-19 and the vaccine has exposed societal inequitie, revealing what little action is being taken to rectify them. The pandemic has decidedly highlighted the fraught divisions within the nation in more ways than one, but by acknowledging these frictions, we leave room for conversation, healing and unity.

For more, explore our COVID-19 Collection.

BEYOND RESILIENCE: THIS BODY

Watch a virtual screening of 'This Body,' a HINDSIGHT film by Firelight, Reel South and the Center for Asian American Media, and hear filmmaker Zac Manuel and special guests, Dr. Thomas A. LaVeist, Dean and Weatherhead Presidential Chair in Health Equity at Tulane University, and activist Shana Griffin, discuss the film and answer questions. Moderated by Tambay Obenson, staff writer at IndieWire.

COVID-19 shook the globe in early 2020, and as we continue toward healing and a new normal, WORLD Channel’s stories of loss, strength and resilience alike remind us of how unity helps us move forward after periods of instability.

Explore how teens in America are seeking a new normal and redefining school life.

Annie Katsura Rollins is an interdisciplinary artist and researcher. Yung Chang is a writer and director. They are the filmmakers of PANDEMIC19, an award-winning documentary humanizing the frontline experience of three U.S. doctors during the first wave of COVID-19.

A look at how Seattle's public health cared for its most vulnerable during the pandemic.

A look at how Seattle's public health cared for its most vulnerable during the pandemic.

Article Cremation Is on the Rise in Black and Latino Communities During COVID-19, Funeral Professionals Say

The way Black and Latino communities in the U.S. mourn their dead is changing.

Episode
FRONTLINE
Death Is Our Business/Love, Life & the Virus

Article ‘Playing Russian Roulette With Our Own Lives’: At Black-Owned Funeral Homes in New Orleans, COVID Takes a Harsh Toll

Death is Our Business examines in intimate and moving detail how Black funeral homes in New Orleans have had to adapt to the devastating impact of COVID-19.

A mother & daughter organize their Black community to prepare for the 2020 presidential election and its challenges.

Unraveling some of America’s most popular conspiracy theories.